Robert Matsukawa started learning about trust in 1936. He figured out that the only people who were buying policies through his new insurance business were the folks who already trusted him. His family, his friends, his neighbors. It wasn’t a question of love, it was a matter of faith in his character. Those closest to him knew that they could place their confidence in Robert, because he had been reared as a person of integrity.

And Robert knew he could never violate that trust. If that trust was broken, he would not be able to hold his head up at the family dinner table or walk the streets of his home town. Wahiawa was a pretty small place. Still is, for that matter.

Robert knew from the outset that he really had to deliver in the knowledge department. If people were going to commit into his care a good portion of their financial security, he really had to know insurance. Inside out and backwards. All kinds of insurance.

And he had to know his clients nearly as well as he knew his own family, so he could really understand their needs, their concerns, their dreams for the future.

After all, people were relying on him. And on his wife.

Following the war, Robert married Grace Mikami, who started working with him every day as if she were dedicated to living up to her name. Grace’s disposition to be generous and helpful became the foundation on which she and Robert built a business that relied not only on his ability, but her innate sense of service.

There was born a concept, still in place today, which stated that if you provided quality products and high degrees of service, satisfying growth would come from existing clients. They would not only add to their insurance coverage, but would recommend Matsukawa Insurance Agency to others.

The service component used to be Grace. Now it is a knowledgeable team of account executives, some of whom have been in place for decades.

Without giving it a lot of thought, Robert and Grace earned the trust of an ever-growing list of clients; the same kind of trust that Robert’s family, friends and neighbors had in him from the start.

Then, into the Matsukawa ‘ohana, came son Wayne. You almost have to have grown up in a household where Mom and Dad work together to fully appreciate how much the business becomes a part of the family. You get to know it from the beginning as if it were a brother or sister. It becomes a part of you. Even before you start any formal study of its components.

Wayne, of course, studied insurance, but not before living it. When his folks retired in 1989, the transition was seamless, as the second generation of Wahiawa folks joined the client ‘ohana.

Two generations of trust now becomes three generations with Wayne’s daughter, Tricia, who has joined the business and will continue the tradition of the Matsukawa Insurance Agency. Tricia has been inspired by all the ways her family has been able to help their clients so it’s become her passion to do the same. The tradition continues. 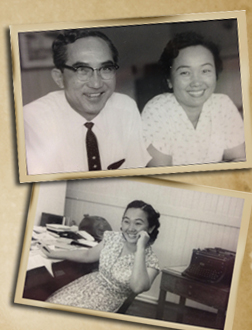